Home Miles Stories Miles is on the road again!

Miles is on the road again!

Miles is well and truly back on the road and quickly back into a routine of clocking up the miles despite Melbourne cold wet winter weather.‪#‎GoMiles‬ ‪#‎FreshStart‬

Day 3.”Soooo cold this AM. Got up at 2 AM, raining so back to temp, up again at 4, still raining, so set off at 5.30 and followed but didn’t catch up with the rain cell as it progressed down the peninsular.

Hi to Oscar and his Dad who were out riding together, this morning.

Distinct drop in the numbers of riders on the Bay road. Feel really guilty going on about the temp, it’s 200 to 300% warmer than the guys had on the final PBP qualifier (Audax) never mind the hardy souls in Canberra, Parks NSW and Country Victoria.

One of the benefits of doing Ossie Nicholson’s 1937 WR route, after setting off from the same location as Irene Plowman, is the Bay moderates the local temp, a couple of degrees warmer in winter and several cooler in summer. 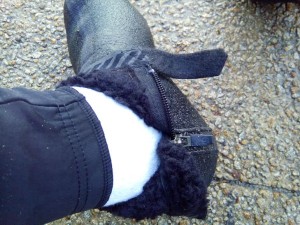 Day 2. “A cheerio to Ash who stopped to say Hi, just past Safety Beach earlier today. You will have to copy me with the details of your next ride to Queensland Ash, no make that your next but one (2017). I rode up to Queensland about nine months ago for an Audax 1200 (7,000 in total).

I’ve taken on board the advice Leigh Patterson (Lethal in Audax circles, Paddo in MDBC circles) re easing into the year, together with all the other info he gave me a couple of weeks back. Leigh and Roy Jenkins both are guys who speak a little but say a lot, far better than the usual speaking a lot but saying so very little.

We had showers all morning and despite it just being cloudy and cold all day, just as it gets dark, all the clouds clear and you can literally feel the temperature falling to low single figures. I’ll just get a very early night tonight.”

Day 1. A wet start, but “Big shout out to guy with high viz overshoes who slowed down from doing well past 40 kph to say high and the two guys this AM, who I rode with from portsea to safety beach.”