This was/is my first bike, obtained from the next door neighbour’s hard rubbish pile, three years ago.  After a major investment of $9.00 for a couple of inner tubes, this has been my cross city bike of choice ever since.  It’s as hard as nails, and has spends most of its life since its resurrection, chained up and left on the street.  It looks like crap so thieves nick anything/everything else.

Over the past three years this bike has taken me from sitting on the couch, via cycling the last 5 kilometres into the City, to today’s attempt at the world record.  I still ride this bike every day and will continue to do so during the next year. 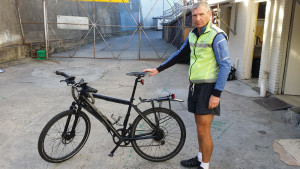 Trek ION (Aluminum) Cyclocross.  63/53/39 front rings and 11/32 rear cassette.  Purchased from My Mountain, two years ago.  I chose this bike as rear stays will take the larger front ring, whilst still being able to run a 47C tyre (smooth) and being
able to just unclip the cantilever brakes, if I bung a spoke or three, I can just keep going.  Mud guards are an option in winter as the frame has lugs and I can carry 40+ kg panniers when cycling to and from Audax events.

I have ridden this bike on the Sydney to Melbourne Audax 1200 km (746 miles) over the highest peaks in Australia (Kosciuszko), done the Audax Alpine Classic (Ultimate 320 4,000 metres of climbing) and Fitz’s Challenge (255 km Extreme with 5,000 of climbing) with gears left to spare (use the links to find out about these events).  As it’s a cyclocross bike it’s built to be ridden across ploughed fields  and not break. 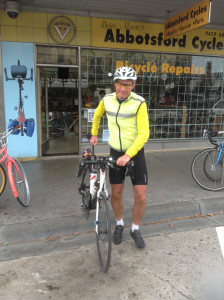 Purchased from TFM 18 months ago.  I chose this bike as rear stays allowed slightly more aggressive gearing, whilst retaining all the benefits of the white bike set out above.  This bike gets ridden as my commuter, about 155 km (96 miles) per day.   Front derailleur on both is via a bar end shifter as a standard Shimano STI  (brake/gear) lever does not have enough grunt to handle the 27 tooth leap.  This bike has Cinelli mash bull horn bars with Jtek AeroBrake bar end brake and gear levers 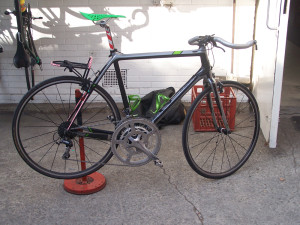 I carry a minimum three spare tubes, one folding tyre, carbon string spoke, patches, glue, split link, spare nipples, multitool that has a doer-up and un-doer for each and every nut/bolt and a chainbreaker.